Today was a big ride. We rode 100 km (5 hours and 45 minutes over the course of 8 hours) with over 3000 feet of elevation gain in the heat for Nesha Gift and Namagenyi Pretty, two little sweethearts that are very special to me. Their pictures were a real source of encouragement for me as I looked at their smiling faces tucked in my handlebar bag many times today.

I’m so glad we got an early start because today was a hot one. And never ending. It was another 100 km day – half it it on pavement and half on the dustiest roads we’ve been on so far. Dusty like vehicles pass you and you have to hold your breath and close your eyes and hope you stay on the road. Dusty like you take a bite of your granola bar and eat sand. Dusty like you blow your nose and red dirt comes out.

The paved section was pretty uneventful minus seeing a few unique sights as always – the Trump bus and a guy carrying his bike ON a motorcycle. We chose this detour in part because it runs right alongside a wildlife preserve and there was some online discussion about the possibility of seeing the big five. John had a dream the night before that an elephant charged him and so he jumped off his bike and the elephant trampled it. Then he got back on his bike and rode off to glory, making a bomber ad for Surly bikes. Sadly, all we saw was one monkey in a tree and lots of trucks.

The dirt section we took today was home to probably the poorest group of people we have gone past so far. Fewer people were capable of speaking English and everytime we stopped, there was a drunk young man offering advice or asking us to give him our bikes. The kids were always shocked to see us and we made a few of them scream and cry. I have that same effect on babies at home though, so yeah…

We didn’t really eat much throughout the day except for some salty jerky and we were feeling it with about 30 km still to go. Although we passed through a few very small villages, the food on offer was not designed for finicky Canadians. With about 25 km left in our ride, we did find some bottled water that was a bit of a saving grace, but we did have to tolerate some extra love from the local drunk. We need to do better tomorrow. I was feeling faint and was so thankful that the sun finally went behind the clouds around 3pm.

Oh, and then this….John had a rear flat with about 40 kms still to go on the dusty and rutty dirt roads. So he would race like mad for about 3 kms before the tire would go flat again. He’d begin pumping it up as I would catch up and then off again we would go only to have to repeat the process down the road. We had to stop and pump it up in the heat and the stares TEN TIMES. For those who understand what it means to ride tubeless tires, you’ll appreciate John’s mistake of using a valve that can’t have its core removed so that new sealant can be added. So to fix his particular tire properly, it would’ve required pulling the tire out of the bead to add sealant. He knew this was a potential issue before the trip, but saving a few bucks also makes him happy. He couldn’t find the source of the leak and he has to work on it tonight. He had a surprisingly good attitude throughout the day, but now that we are done, I can see the day drained him. We did get a hot shower for the first time in days and I hope he sleeps well tonight. He is such a trouper and I get so much of my strength from just watching him never give up. 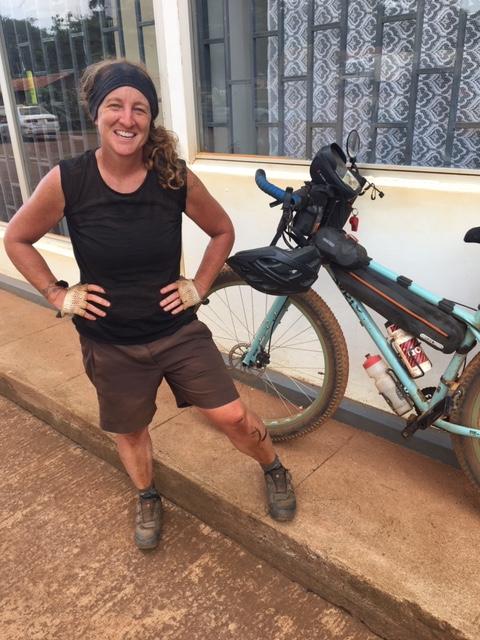 ← Sunshine and Potholes
Late start, but at least we started →