Lessons in the Desert

I am learning so much about myself through this process, I can’t even tell you. Good things. Bad things. And yep, ugly things. The lessons continued on our recent bikepacking trip to the desert around Phoenix that we planned as a dry run – a ‘dress rehearsal’ of sorts for the real deal in Uganda coming at breakneck speed in just two months. Gulp. I was very aware of every lesson the desert had to teach me and thought I might share some of those lessons with you…

Lesson #1: Planning for the worst case scenario weighs too much

John warned me and warned me…you’re not going to want to carry all that weight. My pride would wield its ugly head and insist to carry my own weight. I don’t know if it was the compact mirror that I brought just in case I needed to care what I looked like out on the trail, or the speaker/flashlight/power bank all-in-one

that I insisted on taking in case we wanted to have a dance party in the desert. Both dumb. Honestly, I think that I get wrapped up in what I see as cool on Instagram when I see the heavy loads that everyone else can carry on their bikes and I want to be that person. I’m not that person. Instead, I’m the person who sees a hill and starts the negative self-talk about how I am going to get my butt up to the top and how I can manage the pain. I’m the person who stands next to John’s bike in pictures so that people might mistake his load for mine. I’m the person who needs more training. I’m the person who cries out all drama-queenish, “John! Where are you? Wait for me!” between dramatic gasps for air. I was even annoyed with myself. It didn’t take long before I was practically forcing my extra stuff into John’s panniers and re-evaluating EVERYTHING I had to carry. It’s a fine and dangerous balance. You want to have things in case you need them – things like water and Neosporin. But it’s frustrating when you haul water up and over passes anticipating a scarcity of water and then have to push your overloaded bike through three rivers. And I didn’t need my Neosporin even though I fell twice.

Lesson #2: Make your own way – you’ll enjoy it more 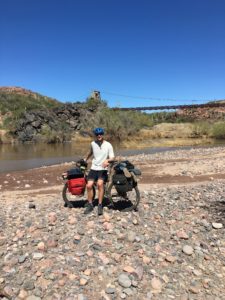 The route we had planned is called ‘The Fool’s Loop’ on BIKEPACKING.com. Well, they got the name right! It is rated as a 6/10 for difficulty and I really need to start paying attention to who is doing these ratings. The man who rated this one lives in a van, works for MEC, bikes to work every day and is probably in his 20’s. Lesson learned. I was so overly concerned about following the route perfectly that I lost sight of the beauty around me, had a hard time embracing the unexpected (unless it was a Dunkin’ Donuts – I embraced that), and just lost the opportunity to enjoy myself while training. It turns out we rode 243 miles, a few more than the proposed loop, and still managed to have one night in a motel and a day to explore Phoenix on bikes. Although we didn’t follow the exact route and avoided some single track, it was a beautiful time of year to be in the desert and it helped John and I build teamwork. Not too shabby.  Just another reminder to stay in my lane.

Lesson #3: There is literally nothing that a little junk food can’t fix

I have never ridden so hard for McDonald’s in my life. Don’t judge me. After a day of heat exhaustion, lots of climbing, terribly bumpy roads, saddle sores, dust, and lack 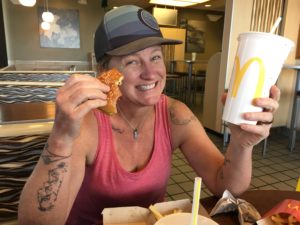 of water, I had just about had it. We thought there might be a McDonald’s up the highway about 4 miles out of the way from where we were so we took a chance and it paid off in a Quarter Pounder with cheese and a large fries. The fact that I was even willing to ride one single mile more than I had to is testament to my craving for salt and fat. I thought I had died and gone to heaven. The great thing about biking is that it feels like you can eat whatever you want and it doesn’t matter. In fact, John says he bikes “strictly for the treats.” We lamented that in Uganda we will not just stumble upon a Dunkin’ Donuts or a McDonald’s so we will have to find our own special treats to keep motivated…maybe watermelon and pineapple. That sounds a little healthier!

Lesson #4: Rules are made to be broken 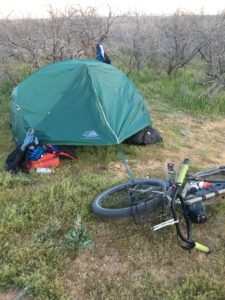 On our first day, because of my obsession with the route (see Lesson #2) and a late start, we were rolling into Brown’s Ranch at sunset later than anticipated. Brown’s Ranch is a day park for bikers, hikers and horses that is open from dawn to dusk with formidable bars that slowly shut when the sun goes down to keep cars and people locked in or out. People were rushing out after a day on the trails and a man stopped to help us by telling us all the other places we could camp, the closest one being about 10 miles away. Yeah, no way I’m riding any more today. John and I were both thinking the same thing, “I wish this guy would leave so we could sneak into the park and find a place to stealth camp for the night before it gets so dark we have to turn on our headlamps.”  He finally left, wishing us the best of luck. We quickly and quietly snuck into the cactus and found a relatively flat place hidden from the trail and pitched our tent. Between the repetitive massive leg cramps, shivering cold and sweaty bodies (how does that happen?) and the sound of gunfire, the first night on the trail was pretty rough and we hoped we had our worst night out of the way. Turns out we were right.

Lesson #5: Everyone needs a Gary

Gary, I know you will never read this and you and your dog, Oscar, are out there somewhere enjoying life, but thank you, brother!  I met Gary when I had just pushed my bike up a long hill and was feeling a bit faint. I had a small meltdown where I remember saying something along the lines of, “John, why did you let me decide to do this?!  I am so stupid to think I could do this trip, let alone bike for 50 days in Uganda. I am so screwed. I can’t do this! I should have thought this through more.” And, if you know me, there were probably a few other choice words (ahem) thrown in there for affect. So as I’m sprawled on my back crying in the dirt, along comes Gary. He pulls over in his 4×4, like many others did along this route, to check to see if everything was ok and if we needed water, etc. John just has a polite conversation with him as I wipe the tears away, hiding behind John’s bike so Gary can’t see me cry. He tells us he is just scouting the area and will be coming back our way soon if we need anything. Great – thanks for stopping, Gary. We pedal on and then John has a great idea for me to get a ride from Gary for a few miles when he comes back around. You would think that with all my self-defence training, my first thought would be of my safety and whether or not that was a good idea. NOPE! Gary and Oscar gave me a ride for about 4 miles – up the steepest and most rugged terrain of the entire trip. I was surprised to find my bike still intact after being thrown around in the back of his truck but even more shocked to see John pedalling up the “road” like a boss that even Gary’s truck had issues with (more about John later). What I learned from Gary is that I cannot do things alone. Sometimes I need to swallow my pride and get in the damn truck.

Lesson #6: Mountains sometimes appear bigger than they actually are and sometimes they really are just that big

You know when you are riding a bike or hiking and you see a dreaded incline coming up?  Sometimes, when you actually get to these mountains, they 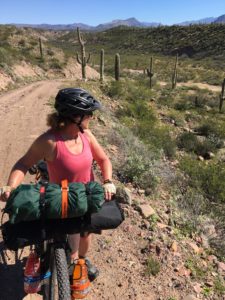 seem more like hills and aren’t as steep as you thought they would be. And then sometimes they are exactly how steep they look and they slow you down, make you rest, re-evaluate your progress and look forward to the downhill that’s coming soon. There was a lot of climbing on this route. A LOT of climbing. Sometimes my legs had it and sometimes they didn’t. It made me think of some people in my life going through some hard times and how big their mountains must feel…how much THEY need a Gary to come along and offer water and a ride. It gave me perspective on my privilege to have the freedom to ride a bike, to travel to Uganda to engage with the culture and how I can make the mountains before me seem smaller by keeping the right perspective. I hope I can remember this lesson when I’m faced with the bigger mountains this summer and truly appreciate those little bits of relief that seem to come at exactly the right time.

Besides using this trip to test out our gear, we also wanted to see how we would do physically, especially after John’s accident and hard recovery. As the person who has 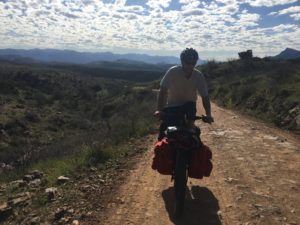 watched John every day since April 24 last year as he navigated a new normal, some new limitations, endless hours of therapy, and a concerted effort to face fear and get back on the bike, let me be the first one to tell you that I have never been more proud of anyone. I do not know what this man in made of that he can do the things he does after what happened to him less than a year ago. He absolutely crushed this ride in every way, shape and form. He rode up terrain that seemed impossible to me. He was able to sleep on the ground for 6 days straight without major issues in his back and neck and in a highly emotional moment for both of us, he rode on the Interstate with semi-trucks flying past us at 75 mph. His strength is something I depend on without question and I’m so thankful to have a man in my life who will carry my weight, plan a route that suites me, give me treats, break the rules to keep me safe, encourage me to rely on the Garys, and push me up those mountains. I would say that our dress rehearsal taught me exactly what I need to know to carry on.