Getting Back In the (bike) Saddle Writing this blog has been in the back of my mind for the past two weeks as I have navigated one of the hardest situations that has even happened to us as a family. But now that it’s time to write, I don’t know how to wade through all there is to say as there is just so much….

Most of you know that on Tuesday April 24th, two weeks ago (to the day that I’m writing this post),  J

ohn was being the lovely adventurous man that I fell in love with and riding his bicycle on a solo trek from Las Vegas, Nevada towards home to Nelson, British Columbia. Our plan was that on Wednesday, I would start driving towards him and we would eventually find each other somewhere in Oregon, celebrate his epic ride and make our way home to meet our son who was planning on coming home for the summer from university to help John with various tasks, both large and small that needed another pair of hands. John was really good about phoning or texting me every day, mostly in the morning before he set out, but he hadn’t checked in yet. I thought nothing of it, knowing that cell service was spotty on this leg of his journey. I knew he was okay the night before because he had sent me a picture of his dinner – Coke, trail-mix and liquorice. That’s what you get in the desolate California desert when gas stations become your pit stop, restaurant, toilet and power-up-your-devices source. 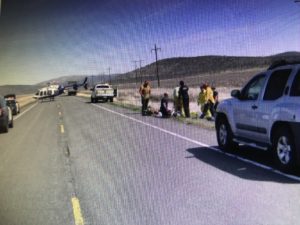 John says he was feeling very strong that morning and after battling horrific headwinds for a week straight, he was pretty happy that the wind was at least gusting from his right side rather than straight in his face. The next thing he remembers is waking up in the hospital with multiple broken ribs, facial fractures, broken teeth, road rash, a sprained and bloody ankle and a chest tube from a punctured lung. He remembers not a thing…not one single thing. From what we hear from the trucker (who thankfully stopped immediately to tend to John until more qualified help arrived), he saw John about a mile away on the wide-open road but for some 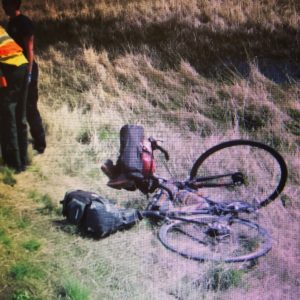 reason, he stayed in cruise control and the on-coming car, his 18-wheeler and John all lined up at the same time and somehow John was either blown into (significant wind gusts that day) or sucked into his front fender right by the front wheel. His left shoe was ripped right off his foot from a lug nut, but his right foot was still clipped into his pedal when Officer Hallmark arrived 14 minutes later. He was air-lifted to the Renown Medical Center in Reno, 150 miles back in the direction he has just come from.

Me? Oh, well, this is kinda embarrassing but I was practicing my kickboxing “routine” as I was scheduled to teach a class when my sister-in-law called and told me, “Everything is ok, but John has been in an accident.”  ~panic rising~ I asked if he had been hit by a car. “No,” she said. “He was hit by a semi-truck.” WHAT?!

Yeah – not my best moment. I am not good in a crisis. Not.good.at.all. I had a full blown panic attack – the kind where you can’t focus and you’re flapping your hands in the air while trying to figure out how to get to Reno the fastest (and cheapest – totally ingrained) way possible while throwing random things into a bag and making sure you bring underwear for John because you never know when a pair of clean underwear might be a necessity and trying to think of random people who might need to know you’re gone and cancelling all appointments you have for the next two weeks because you don’t know when you’ll be back and knowing you need to call your kids to tell them even though you remember they both have their most difficult college final the next day. Yeah, THAT kind of panic. You’ll be amused to know that somehow my swim suit bottoms made the cut.

I called the nurse in Reno before I left and had the chance to hear John’s sweet (and totally drugged out) voice say, “Stacy, I’ve been hit by a truck in Reno and you have to come get me.” 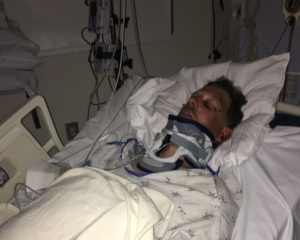 Shamefully, my first thought was how much that sounded like that could be a Johnny Cash song title. My second thought was how our lives were about to change if John had irreparable damage to his brain, spine or elsewhere and knowing there was nothing more the nurses could tell me as they had only started the battery of scans and tests. Worst flight ever. I kept waiting for someone to ask me if I was okay and it just never happened. I do know that next time I see someone who’s a hot mess in an airport or on a flight, I am definitely going to at least make eye contact and offer that poor soul some water. Sheesh, people. 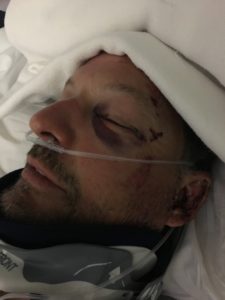 car to come and get me and take me to John’s room. I asked him to send me a picture ahead of time so I knew what I was walking into. When I heard ‘facial fractures’, I assumed he had face planted after impact and that he would be hard to recognize. I was so relieved to see that although his eye was swollen shut and he had lots of scrapes and bruising, his handsome face was still his. I actually think the black eye is quite attractive and wouldn’t mind if he kept it for as long as he wanted to. 😉

Rather than giving you a play-by-play of the hospital visits, here are some highlights:

This entire journey has so far been a deeply spiritual one for me personally. The night we came home, I was finally able to release everything that I’d been burying all week. I did fall apart here and there along the way, but never in front of John and never really let it all out.  Well, it all came out….waaaaay out. I was a snotty, weeping, exhausted mess in the shower and it was at that moment on my knees, all naked and vulnerable, that I gave God permission. Over and over and over and over, I gave God permission… permission to use me and our lives or deaths in whatever way He sees fit. He has permission to take me, John, Hannah, Dylan, this trip to Uganda, and everything that matters to me and use anything He wants for whatever He wants. It’s a terrifying prayer. Terrifying. And I knew what I was saying. But I can say it and mean it because I know He is good.  He is so so good. And I give Him permission.

← My Playlist Gonna Save Me
Going (almost) Solo →